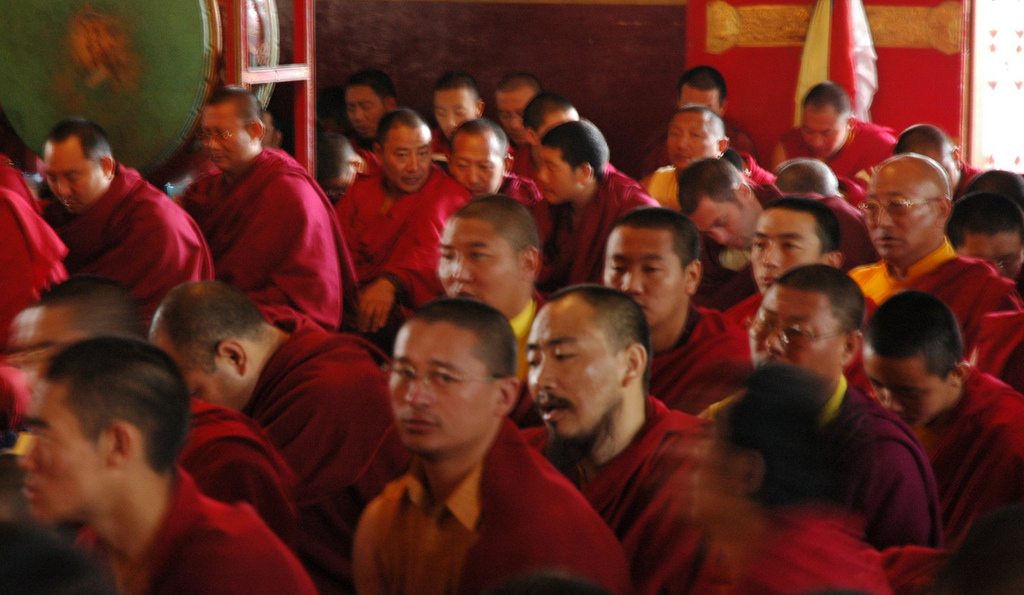 I recently viewed a wonderful documentary film about the people and the religion of Tibet called “Under the Vajra Sky.” It focused on the religion of Tibetan Buddhism and the systematic destruction of the Tibetan people’s language, religion, and culture since China’s illegal annexation and occupation of that country in 1950.

About one-hour into the film, however, I noticed that John Bush, the movie’s writer, narrator, and director, was carefully avoiding the use of the word “religion” in referring to Tibetan Buddhism—a religious tradition so obviously “religious” that some reputable scholars in the field have even called it the “Roman Catholicism” of Buddhism.

Instead of labeling these ancient and obvious beliefs, rituals, and devotional practices a “religion,” the filmmaker kept referring to Tibetan Buddhism as a “wisdom tradition.” By the end of this two-hour movie, I’m sorry to report, the director had not used the term “religion” even once to describe this ancient faith. Clouds of incense; sanctuaries filled with chanting monks in ritual headdress; walls covered from top to bottom with icons or, as they are called in Tibet, tankas of protector-deities; throngs of pilgrims prostrating themselves and lighting candles before gilded images of the Buddha, their hands clasped in prayer or fingering their “mala beads”—Tibetan “rosaries”— to the rhythmic repetition of sacred mantras; spinning prayer wheels; flapping prayer flags: all of which I personally witnessed during my own 2007 trip to Tibet and its famed Jokhang Temple in Lhasa. And yet, none of these devotional practices would provoke our thoroughly postmodern writer and director to abandon caution by using the “R” word—“religion”—to describe any of it.

In a very odd and ironic sort of way, this western convert to Tibetan Buddhism was as consistently “a-theistic” in his language as the Chinese government in its domestic policy. I won’t presume to speak for His Holiness the XIV Dalai Lama—anymore than I would presume to speak for the bishop of Rome, His Holiness Pope Francis—but all this semantic nonsense made me wonder if the Dalai Lama might not be just a little annoyed at hearing his own great religious tradition blandly and continually referred to as a mere “wisdom tradition”!

Well, after the movie, my annoyance quickly turned into more sober reflection as I began to realize that this episode of postmodern silliness is by no means restricted to discourse about Tibetan Buddhism. We in the so-called blue states or—as we are often described in clergy circles, the “graveyard of the churches”—are also often very reticent to speak about “religion” and religious believing. While some of this reticence may have to do with our justified horror over the uses of religion in both the domestic and international arena these days—especially in the propensity by religious fanatics here and abroad to use religion to promote the very secular myth of redemptive violence—I wonder if we do not suffer from old-fashioned embarrassment and fear to witness, as people of faith, to “the truth that is in us,” in the words of Saint Paul. I wonder if we are not just as cowed by our own doubts, as influenced by the disbelieving majority, and as fearful of making the existential commitment of our whole being to the truth as we have come to know it, as were the people of Jesus’ own time in this morning’s reading from the Gospel according to Saint John.

Our Gospel this morning gives us real insight into the profound difference between mere wisdom of any sort and the canopy of meaning, the existential summons to commitment, and the radical transformation of our own personhood—indeed, of the whole of reality itself—fostered by a religion and the experience of human believing. As we hear and see in today’s Gospel, the spiritual journey is no “magic carpet ride into bliss” for the earnest seeker after Truth; rather, it is a “battering from without and a boring from within,” as Father Thomas Keating, the founder of the modern Centering Prayer movement, describes it. It demands nothing less than the surrender of one’s whole being to the call of a God who is Absolute Love, Beauty, and Truth. And yes, the US president’s chief lawyer notwithstanding, I am making the apparently contested claim that truth really is truth!

So, let’s look closely at this morning’s reading and its context. In the section of Saint John’s Gospel from which we have been reading these last four weeks, Jesus has fed the hungry multitudes on the shore of the Sea of Galilee through his overwhelming compassion and steadfast love for them. He has spoken passionately and in highly poetic language about his full and unique communion with his “Father”—and with them—as divine Love incarnate and the inaugurator of the “kingdom of God” in its fullness. He has invited them into this kingdom and into eternal life by eating his “flesh” and drinking his “blood.” And he has summoned them to join him in proclaiming by word and deed God’s intention to restore our broken humanity and our blemished world to God’s best intentions for both. And finally, in today’s Gospel, we hear Jesus invite all people into the sacramental expression of God’s love and desire to nurture our body and our soul—through all the worlds of God—by inviting everyone into God’s celebration here and now of the world as a wedding: the Holy Eucharist of word and sacrament, of bread and wine, of Jesus’ real flesh and blood, as a foretaste of the Marriage Feast of the Lamb in the age to come. What a breathtaking vision of human possibility; what a startling and improbable—even scandalous—invitation then and now!

And yet, what is the all-too-human response to this proclamation of love and this extravagant summons to fulfillment? Saint John tells us that, “Many of his disciples when they heard it, said, ‘This is a hard saying; who can listen to it?’ [And] after this, many of his disciples drew back and no longer went about with him.”

Now, if this were the end of the story, this Gospel would be neither “Good News” nor very edifying for our body or for our soul this morning. In fact, it would be merely typical and just another instance of the “banality of evil”—from the dereliction of the Cross to our very own time and place. Most of us—and I include myself in this unhappy company—spend much of our lives running just as fast as we can from the steadfast love and compassion of God. Many of us, in ways both large and small, constantly close our inner ear to the summons of that biblical “still small voice” within us, beckoning us to real love, to real transcendence, to real commitment, and to real meaning. We prefer the restlessness and vague desire of our little lives of quiet desperation to God’s unconditional offer of safe harbor in the encompassing reality of the “More,” that “Horizon of Gracious and Loving Mystery” in whose presence we “live and move and have our being.” (BCP) Like the crowd in today’s Gospel—and the rich young man in another—we won’t take the radical risk of faith understood, not as the intellectual assent to a set of dogmas, but as the openness of an enlightened mind, a loving heart and a determined will to the risks of the spiritual journey and the promises of a compassionate God. We settle for the constricting and familiar anguish of the “false self,” with its doomed programs for emotional happiness, to the wider and riskier adventure of the “true self,” rooted and centered in the indwelling God who, as the great German mystic Meister Eckhart reminds us “is always at home even when we have sometimes gone out for a walk.” Father Keating reminds us in his writings that “the spiritual journey requires only one tiny step: out of ourselves and into the encompassing reality and mystery of God. And yet, of all the steps, on all of the dusty roads of our journey through this passing life, it is the most difficult step of all.”

Well, fortunately, this is not, as they say, “the end of the story” this morning. There is one more crucial and final act: Jesus turns to the Twelve and confronts them with his great, existential question to every Christian: “Do you also wish to go away?” And Simon Peter, the always impulsive spokesman for the group, responds with words that I have continually found myself repeating during my own moments of doubt and anxiety and confusion over Jesus’ “hard sayings”; words that have kept me loyal and faithful and committed in my own halting way through all of the changes and chances of this passing life: “Lord, to whom can we go? You have the words of eternal life; and we have believed, and have come to know, that you are the Holy One of God.”

Indeed, my friends in Christ, “to whom can we go” in this violent and distracted world? Whom shall we imitate? Who has the power and the authority and the wisdom to save us from all of those false choices and those sources of false transcendence that have plunged us into the mess of our world and of our personal lives? Whose words and example can empower us to “repent,” that is, “to change the direction in which we are looking for happiness”? For a Christian, is it not Jesus the Christ? And for others throughout the world, like those Tibetan Buddhists, whose prayers just as certainly reach the Throne of Grace as ours do, is it not the great prophets and teachers and avatars of the world’s great religions? Yes, there it is again: “religion,” the “R” word, from the Latin “re-ligare”: “to restore a fractured reality”; “to bind together separated things.”

So, the “Gospel,” the “Good News” this morning, is that we inhabitants of the postmodern era—and a religiously plural one in a globalized world for a certainty—need not fear to proclaim boldly that we, together with all believers all over the world in every language, culture, race, and region, follow a religion and worship a God who always waits like a beggar of love at the door of our hearts, never presuming to push that door open. We are keeping our hearts open—often despite all pressures to the contrary—to a God who is always greater than anything we may say about God in any religion, language, culture, or—if we must—“wisdom tradition.” We have made Pascal’s great “wager,” staking our whole lives on the reality of “all that is, seen and unseen” in the words of the Nicene Creed. We have the audacity to hope that this great and Holy Mystery, this Hidden Ground of Love, has not “left us as orphans” to find our own way through the corrupted currents of this world. For our Trinitarian religion of the Incarnation scandalously asserts that when we do “the will of the Father” and “abide” in Jesus Christ through the unmerited grace of his “flesh and blood,” “the bread which came down from heaven,” we live in the Spirit of God, and God’s Holy Spirit lives and prays in us. You see, the world, God’s world, is a wedding after all, and each of the world’s great religions embodies a unique Divine self-disclosure and an individual invitation to experience God’s spousal, covenantal love at God’s nuptial banquet! In Christ, God’s vital connection with humankind has been re-established: we are bound together in communion with God and with one another again. This is—and yes, I’ll boldly say it—true religion! “Lord, to whom can we go? You have the words of eternal life; and we have believed, and have come to know, that you are the Holy One of God.”

Topics: Movie review, religion, Tibetan Buddhism, Under the Vajra Sky
« The Joy in Repetition The School of Faith »