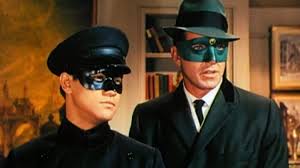 Most of you are too young to remember a show called The Green Hornet. I’m not talking about the movie that came out a few years ago, which was pretty much a failed attempt to trade on a character created in the comic books to make a successful movie. Maybe you love Superman and Wonder Woman and Batman and Captain America, but I’d wager quite a bit that no one is planning any sequels of the Green Hornet movie.

The Green Hornet started as a radio series produced out of a station not in New York, and not in Los Angeles, but, of all places, in Detroit—WXYZ. It was the same place where The Lone Ranger got its start—also another failed movie. (Maybe it’s something about Detroit.)

And here’s a bit of radio trivia: When both shows became incredibly popular, in the 1940s and 50s, the story lines were made to connect. Britt Reid, the dashing young newspaper publisher who had a secret identity as the Green Hornet, turned out to be the great-nephew of the Lone Ranger.

But Britt Reid was a creation of Detroit. His ride was a car, not a horse, and in fact his car was a big part of his story. It was the coolest car in all of detective fiction, at least until James Bond showed up.

My father grew up on a farm in Michigan, and he loved the Green Hornet. He remembered listening to it on the radio, coming all the way from Detroit. And he loved cars. So of course he taught me to love the TV show that carried on the story, which came on for exactly one year when I was little.

The television show got to create images of things the radio listeners had to imagine in their minds. And as a five-year old kid, those images completely fascinated me.

Britt Reid was secretly the Green Hornet. So, of course, the Green Hornet wore a mask. He lived in a house that had secret entrances through an alley behind the building where his newspaper had its offices. He could pull a certain sequence of books from the shelves in his book-lined study to open a secret passage way that made the fireplace go up and a staircase come down.

And best of all, the garage where he kept his plain old everyday car had a rotating floor that flipped to reveal his super secret car.

Oh, it was all just wonderful. Especially for a kid growing up in a family with a dad who was an alcoholic and had a lot of secrets to keep.

We are not entirely sure just who wrote the three letters that are identified as Letters from John. We think the author was an elder, let’s say a priest, of the community that had produced the gospel of John, the last of the four gospels to be written. Even though we call it a letter, it was probably a sermon, or an address to the community. The scholars tell us that the community had begun to split, partly because they were having a hard time agreeing internally about just how human Jesus had been.

But there was another challenge this community was facing, a challenge from outside. The church that heard this sermon for the first time was a Christian community living toward the end of the second century, about as far away from the time of Jesus as we are from the Civil War. It was not a good time to be suspected of being a Christian in the Roman Empire.

The emperor in those days was Marcus Aurelius, famous to history as the writer of perhaps one of the first autobiographies. But Marcus Aurelius had no good use for the growing Christian community. Every time things went poorly for Rome—and that happened pretty frequently in those days—Marcus blamed the people who didn’t observe the civil religion of the Empire.

The Christians were especially suspicious. They seemed certain that their god greater than even the most powerful man on Earth—so certain that they would rather die than compromise.

For that little community of Christians, it was all a little worrying. They genuinely believed that everyone, Jew and Gentile, Roman and Greek. African and Asian, would come to understand that Jesus was the incarnation of the true God. They had been raised to believe that Jesus would come at any moment to vanquish the great power of Rome and to bring in a new order of justice and peace.

And they couldn’t understand why it seemed as though almost no one around them got it. No one saw them for who they really were—the people with a message that was uniquely true. Instead of riding the crest of a wave, they had to hide who they were. They had to go underground. They had to live incognito.

It doesn’t take much for us to put ourselves in their places. We understand, maybe more than we would like to, how they might have felt. They even developed a kind of code for recognizing each other, for discovering each other’s secret identities without blowing their cover to the Roman authorities.

When you met someone on the street and didn’t know whether they, too, were part of the underground, you would listen closely to what they had to say. Maybe you would say something in very general terms about this good group of people you knew who had helped out a friend in real trouble because they believed in looking after each other. And maybe the person you were talking with would mention something about sharing a meal with a group of friends once a week.

And at some point as you talked, if you really began to suspect that this person might also be a Christian, you would use your foot to draw a little curved line in the sand—just a simple little arc.

If this stranger wasn’t a Christian, they probably wouldn’t even notice what you had done. But if they were, they knew the signal. They would make a little arc of their own in the sand. And you’d get this— a fish.

You’d get this because you both knew something about what that symbol meant to Christians. Because in Greek the word for fish was ΙΧΘΥΣ—ichthus. But as a Christian what that word meant to you was Ieusus Christos Theos (h)Yios Soter—Jesus Christ, God’s Son, Savior.

It was a way of keeping your secret safe while sharing your common faith. It might be something like the way you feel when you see someone from Saint John’s in a place other than church—on the train, or in the grocery store, or at school. You know that you share something in common, something important. Not just a community, a hope. A sense of how God works in the world and in your life. A way of making sense of the bad things and giving thanks for the good things.

One last more about that sermon to that early church. Even in those few verses we heard, there’s a lot about sin. It almost seems like the elder who was writing to the congregation was really wagging a finger about sinful people.

But if you read the whole letter—something you could do over lunch—what you realize is that whoever gave that sermon had a very different idea about sin and righteousness than we typically hear. Righteousness simply meant “belief.” It simply meant “faith”—faith in Jesus as both human and divine, faith in the sense of being willing to live with the doubts while still seeking to understand.

So what it means to be sinful wasn’t about how you acted, or what you did; it was about whether you kept trying to follow your faith, or you didn’t. If you gave up, or fell into despair, or decided to believe in the emperor instead—that was where we fell into sin.

So that all sounds kind of familiar, doesn’t it? It sounds a lot like the place, and the time, and the circumstances that surround us. Sometimes we have to go incognito, when the world is not that interested in hearing what we have found to be true, not that willing to follow the commandments we are bound to follow—love God, love our neighbors, and everyone is a neighbor.

But that’s okay. It doesn’t mean we’re wrong, any more than it meant that a little church eighteen hundred years ago was wrong. It means we need to stick together, and to make sure we keep alive our ways of recognizing each other for the disciples we are. Amen.