The Amazement of Equality

Last weekend the Vestry spent a day and a half on retreat up at the Barbara Harris Camp in New Hampshire. We were not the only folks there, by any means; it is a fairly large place, and so there were four other groups there, most of them from churches and one a group of poets from somewhere in New England, who have for some years apparently been in the habit of gathering there in the spring to read their works to each other.

On Saturday I stood in line for breakfast with the Junior Warden of Saint John’s, and immediately in front of us in line was a man wearing a long-sleeved T shirt on which he had sewn or pinned or stuck every imaginable kind of insignia of military rank. He seemed to be, at one and the same time, a private and a major, and everything in between. It seemed like maybe he had a kind of unhealthy obsession with the authority, or the honor, conferred by the symbols of military rank. Just to look at him was enough to tell you that he wasn’t a soldier, at least not anymore.

Now, if you can’t quite imagine what it was like standing there right behind this man in line in the company of the Junior Warden, let me help fill in the details for you. Because in case you don’t know it, the Junior Warden served honorably as an officer in the United States Army, ending his service as Captain Brian Goeselt. So of course he is extremely literate in reading the meaning of the various insignia this man had patched and pinned on his T-shirt.

The other thing you need to know about the Junior Warden is that he is nothing if not unfailingly polite. And so when he noticed the very unique and very large patch that had been sewn right on the middle of the back of the man’s T-shirt, he just pointed to it and quietly asked me, “Do you know what that means?” 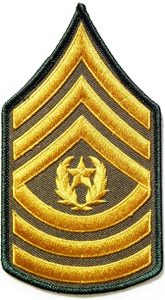 Now, for various reasons having nothing to do with serving in the military, I am pretty good at reading rank insignia. But sergeant stripes have always been a bit of a puzzle to me. This particular patch had a pile of chevrons above, supported by three bowed arcs below, and a star in the center surrounded by palm fronds. Whatever it was, it was pretty rare, and pretty senior.

Brian explained it. “That’s the insignia of a Command Sergeant Major. There’s only one of those.”

With that, the man in front of us, who was not quite yet to the French toast, turned to see who was behind him. And again, Brian was immensely polite, but also solved the problem of my own curiosity, by asking the man very gently, “What’s up with all the insignia?”

Whereupon the man in front of us explained, as though it would completely clear up any confusion, that he was with the poet’s group. I think he could tell by the look on our faces that we didn’t quite grasp how poets and military ranks went together, so he went on to explain that the custom in their group is to award each person who reads one of their poems during the retreat a rank insignia, beginning with a private’s single chevron. So the fact that he had pinned a major’s golden oak leaf on the shoulder of his T-shirt meant that he had been reading poems in the group for ten years or so.

That’s not what it usually means, but it’s what it meant to him.

Now, our junior warden, as I said, is a very polite person. But there are veterans who would not be nearly so polite in addressing a poet in a T-shirt covered with ten different rank insignias earned for reading poetry. One of the worst social violations you can commit in this season of graduations is to show up at commencement wearing regalia you haven’t earned. If any of you remember the Graham Greene novel England Made Me, you’ll remember that the first clue we get that the narrator won’t be trustworthy is that he wears an old school tie from Harrow-—even though he didn’t happen to go to that school.

It’s interesting, if you think about it, that we don’t put nearly as much importance or significance on wearing crosses. Anyone can wear a cross around their neck. But of course don’t so doesn’t make you a Christian, any more than wearing a gold oak leaf makes you a major in the Army.

We create lots and lots of different ways of communicating special distinction, of signifying particularly deserving people. This is pretty deeply built in to us. We are rank-making creatures. We are quick to size up practically any group, any workplace, any neighborhood, any community to figure out who the leaders are, who the top folks are, who the deserving people are.

We make sense of the world this way. Some people achieve greatly, and we say they deserve more. If you win the World Series, you get to go to the White House. If you’re the first person to walk on the moon, you get a ticker-tape parade. We make distinctions, and those distinctions tell us how to tell the deserving people from the undeserving people.

We lean a lot of meaning into these ideas. We translate people’s deserving into a notion of their worth as people. It’s not just that we think people have different levels of deserving; we connect that to thinking that some people are worth more than others. Not worth more financially, worth more somehow morally. More deserving as people.

This was just as true in Jesus’s day as it is in our day. Jesus was a Jewish teacher, raised in a Jewish family, with a message that was directed primarily at Jewish people. His followers were Jewish men and women. They absolutely believed that he was the answer to a Jewish question—who is the Messiah, and when will the Messiah come to us? And they believed that the only people who deserved to have that news shared with them were other Jewish people. This good news was for the people who deserved it.

But in the story we heard from the Acts of the Apostles this morning, the Jewish followers of Jesus come face to face with the realization that God has a very different idea of deserving. And that idea is something very strange, and yet very much a critical claim of the Christian faith.

The story is this. Peter has been asked to come to the house of Cornelius, a Roman centurion—a man who is by no means Jewish. He takes with him some other people from the Jesus movement—Jewish people, just like him—and goes. When he gets there, he finds not just Cornelius the centurion but a whole group of people—none of them Jewish.

Peter tells them he’s not supposed to have anything to do with them. This is what he says: “You yourselves know that it is unlawful for a Jew to associate with or to visit a Gentile.” But he knows he has been sent there for a reason, and so he preaches to them, in much the same way he would preach to a group of Jewish people to convince them about who Jesus is and what his death and resurrection mean—at least what he means to the Jewish people.

But while he is speaking to them, right in the middle of his sermon, the Holy Spirit comes upon all of them—despite the fact that they are not Jewish. Despite, that is, despite the fact that they were not deserving—or at least, that’s what Peter and the rest had thought. All of those distinctions, all of those differences, all of that deserving that seemed to go with their special claims just goes right out the window.

God has a message, too, one that comes right in the middle of Peter’s sermon. And God’s message is, you are all equal to me. You are all equally deserving of this gift. Because you are all equally in need of some path to reconciliation. And so what I have done for you through the Cross and resurrection applies equally to everyone.

Do not doubt for a minute that this is one of the most radical, one of the most important, and one of the most urgent messages of the Christian faith. Until this moment in human history, there had never been anything like a fundamental religious claim that all people are equal. From this moment in history, you can trace a direct line down through the ages to this equally radical statement: “We hold these truths to be self-evident: That all men are created equal: That they are endowed by their creator with certain inalienable rights.”

I am not saying that America is a Christian nation; it is not, and it was not conceived as such by its founders. But I am saying that idea of fundamental equality among all people, no matter where they are born, or what family they are born into, or what race or gender they are, or what guides their conscience—that is a core claim of the Christian faith.

The amazement of equality is exactly that—amazing. Peter is amazed—the word we have in our translation is “astounded”—when he realized that God had shared equally with these people something he thought was the unique property of one faith community. God was demonstrating that so far as God is concerned, no such distinction exists. The Holy Spirit is a non-discriminating, equal opportunity sanctifier.

This is not just an old story. This is a real and present challenge. We live in a nation uniquely founded on the political expression of this idea that we came up with—the ultimate equality of all people. But we are living in a time when that basic idea is seriously questioned, even mocked, by powerful voices, influential voices. We live in a moment in which leaders would separate us and argue that our distinctions are more important than our equality—sometimes for reasons that might even seem appealing, or righteous.

But we are disciples. We are followers of the God who accepts no distinctions and collapses the ones we make. It is remarkably hard to live our lives as people who accept that basic belief and act on it. Because acting on it means doing just exactly what Jesus asks us to do—love each other as we have been loved by God. The way we have been loved by God is equally, completely, without limit, and without distinction. It falls to us to love each other—hard though that may sometimes be—in the same way. Amen.